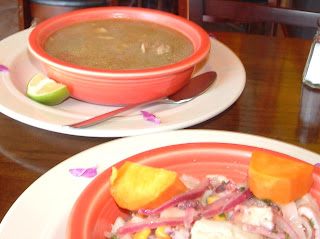 I first visited Pollo Bravo back in May when I was sampling pollo asado at various places on the Southwest side, hoping to find some purveyor close by so I didn't have to make the trip all the way up to Longpoint and one of the El Norteno buses/trailers up there. I had the Pollo Rostizado with Maduros and both were excellent with generous sized pieces. The staff was very friendly, the decor very appealing (brushed stainless steel, varnished pine, bright yellow and rich apricot colors). The other dishes I saw being served looked very good also and I resolved to return but never got around to it until recently.

I was in the mood for some ceviche recently and this place came up in a search for Peruvian restaurants on our local review site, b4-u-eat.com. I have a copy of the menu I picked up in May and nowhere on it do the words Peru or Peruvian appear but now the menu identifies some dishes as Peruvian, some as Mexican.

Once again I found the staff very friendly and helpful; there had been a minor language problem before but none this time.

I tried the Ceviche Mixto, one of two ceviches on the menu. It included fish, calamari and octopus that I could identify plus corn, Bermuda onion, cilantro, lime juice, camote (sweet potato) and iceberg lettuce and was appropriately spicy. It came with a small bowl of a very creamy, rich salsa verde which might have actually been intended to accompany the other appetizer I ordered, the Aguadito, the house soup.

The soup included chicken, corn, onion, tomatoes and peas and was rather bland until I observed another patron adding some of the salsa to it which improved it considerably.

I also tried the Chicha Morada, a popular Peruvian beverage similar to an agua fresca although it's not listed on the menu with the other aguas frescas. It's made from purple maize, pinapple and cinnammon in the classic formulation but I thought Pollo Bravo's version included pear. It's described sometimes as resembling Kool-Aid but it was not sweet at all. I was a little disappointed in it although it is said to be beneficial for blood pressure.

The two appetizers and drink left me so full I could not comtemplate a dessert as I had hoped. Besides the Helado de Lucuma listed on the menu a sign indicates Pollo Bravo now serves Helado de Chirimoya.

I'm looking forward to more visits. The only complaint I have about this place is the cramped parking lot. 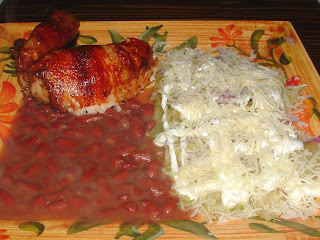 UPDATE: I've enjoyed several more visits to this restaurant over the months. On one occasion I had the meal pictured above, a quarter chicken with Chilaquiles in Salsa Verde. The chicken remains amazingly moist and tender for roasted chicken and the restaurant (original location) remains an excellent alternative in the area if you don't want to hit up one of the ubiquitous Indian or Pakistani places.


Re: the top picture above. At least three years I've had this camera and I still couldn't take a decent close-up. The shot of the ceviche was blurred and out of focus so I have only the shot of the soup across the table with a little of the ceviche in the foreground. There are more pictures of the food on the website.

Bruce what is the dish pictured on the website with sausage and french fries?