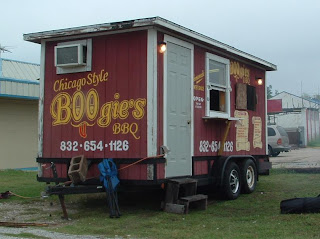 AS OF SOMETIME IN LATE 2016, BOOGIE'S LOCATION ON W. AIRPORT HAS CLOSED.  ACCORDING TO YELP A LOCATION IS STILL OPEN 1767 TEXAS PARKWAY IN MISSOURI CITY.

UPDATE AUGUST 20, 2010: BOOGIE'S HAS FINALLY COMPLETED THEIR PIT AND ARE ONCE AGAIN TURNING OUT BARBECUE IN THEIR NEW LOCATION AT 8035 W. Airport, # 115. IT'S STILL TAKE-OUT ONLY DUE TO THE LACK OF A BATHROOM FOR CUSTOMERS.

I have really been into home-cooking and comfort foods since Ike and have been eating out only about once a week and sticking close to my neighborhood, trying a couple of new places without much luck until I found this place.

On my first visit I tried the sliced beef sandwich. This was served open faced on white bread. There was about 10 oz. of beef and it was very, very tender. They use oak and pecan wood and although you can smell the smoke wafting out of a window on the trailer the brisket was not very smoky tasting. The sauce was like a glaze and very, very, very sweet; somewhat to my surprise I found myself liking it. It tastes a little to me like it has pineapple in it and is reminiscent of a ham glaze. No onions or pickles were offered or served which seems at the very least un-Texan if not un-American.

On a second visit I tried the rib and sausage plate, a very generous amount of food 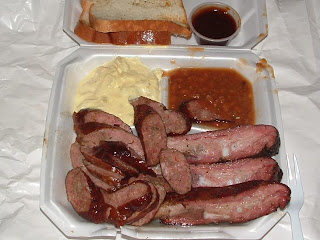 for $10. The sausage, which they make themselves, is pork and beef and I thought it was very good and needed no more sauce or seasoning. The ribs on this occasion were very, very fatty and a little underdone and in need of perhaps just a skosh more seasoning but they have a lot of promise. The smokiness of both meats on this occasion was just fine.

The potato salad is an institutional product and too creamy for my taste; the baked beans were very sweet. The sauce, which they make themselves, seemed darker and heavier than before and still very sweet; I used very little of it on the meats. I sure could have used some dill pickles and raw onion to cut some of the sweetness.

Besides baked beans and potato salad, green beans are offered as a side and extras include french fries, baked potatoes, turkey legs, boudin and cake. Beverages include Sweet Tea and pop. I understand rib tips are a delicacy in Chicago and their Chi Town Special is tips, chips and a pop for $6.00.

Besides the meats I’ve tried they also have chicken, ribs by the slab, rib tips and a pork chop sandwich.

They’re open only Thursday thru Saturday, 11 a to 8 p, and advised me to call ahead on Saturday as they stay pretty busy with call-in orders and the wait can be lengthy.

I’m really glad to have discovered this place as my barbecue options in this end of town are limited. There’s another new place nearby called 3P’s Barbecue which hasn’t gotten its act together but isn’t very promising so far so this is probably my best option for que in the neighborhood and I’ll have to cope with the sweetness or just order a la carte; hopefully the green beans aren’t sweet.

UPDATE 5/09: In addition to all the comments below there have been very positive comments made about Boogie's on eGullet and Roguefood. I don't eat a lot of barbecue these days so I've just gotten around to going back to try this place again.


I think this was better than what I had before. I got the sauce on the side this time, the better to appreciate the meats by themselves. It's been pointed out they apparently finish off the ribs on the grill to give them a little finishing crispness which is outstanding. The potato salad and beans were both much better this time than what I had before.

Be sure to check out hrushing's pictures in his comments below. I've got to get back over here and check out the boudin.
Posted by Bruce at 4:24 PM

Labels: Boogie's, Q, Southwest side, The Burgers of Houston

Boogies is at the back of my neighborhood (Braeburn Valley West). I had high hopes for 3 P's, but was VERY disappointed the last time I went there. Got a sliced beef sandwich that was pretty much nothing but fat and gristle. They also seemed to have been closed for a while. Have you tried the BBQ trailer down Gessner before the beltway? I think it is at West Airport?

I don't eat BBQ very much anymore and haven't been back to Boogie's. One guy on eGullet who went over there to check it out really loved it. Haven't been back to 3Ps either. I thought they had closed for a while too; maybe new owners? There's never any cars there.

The guy at W. Airport - Roy's? I think he's moved but I can't remember where I saw him. I went a couple of times a few years ago. Initially I liked it but got progressively disappointed in what I was served. This is not a good end of town for BBQ. I prefer 2 Brothers over Boogie's but it's a lot more of a drive.

i live in braeburn valley west and had been told by my church members to try boogies last weekend. i had a link sandwich and ate it in 1 min. it was the best sausage i have ever had and the sauce was delicious, sweet but smoky. my mother had the ribs and she loved them, she is big on quality meat, we were both very impressed. we are planning to eat there again today! Maybe you guys went on a bad day because i was not disappointed. but have you also tried luling market near the galleria? now that is good barbecue

I re-read my article and maybe it reads a little more negatively than I intended. I basically like Boogie's but I don't like sweet barbecue. I haven't been back though because I just don't eat that much barbecue these days. Thanks for the comment, though.

My last two visits to Luling City Market have been very disappointing; this goes back over a year and a half. Dry brisket, overcooked sausage and ribs. I think the best barbecue in town now is up at Pierson's on W. T. C. Jester but it's a long drive up there from where we live!

I just tried a new one out on Hwy 6 that I'm going to be reporting on soon.

hrushing - I've been down that way - Roy just moved across the intersection; for a long time he was parked in the corner of that service station driveway, near the storage facility.

hrushing or any others - Roy's will be out of commission for a while. I was coming back from lunch and passed that intersection and the Fire Boys were still on the scene; no smoke or flames visible but looks like the flames had gotten a little out of hand at Roy's today.

http://bit.ly/qyD16
http://bit.ly/1V7IoD
http://bit.ly/qLUo6
http://bit.ly/RcgRT
Here are some pics from my last visit there a couple of weeks ago. Boudin was good, spicy with a good bit of meat in it. Brisket was good, smoky flavor. Lots of salty crunchy goodness on the outside. One edge was a little dry, but better than the super steamed stuff you get from some places. My son (3.5 years old) can devour the brisket quickly. Way better than anything else close to BVW.