The first time I walked into Dumar’s I was taken back many years to my first visit to the original Antone’s on Taft.  Dumar’s is much smaller than that long shuttered store but the feeling is the same - a slightly exotic setting for dining and grocery shopping, with enticing sights and smells.

Dumar’s is a little gem, a small shop lurking in a large strip center back from the highway, behind the seemingly endless rows of chain restaurants, banks, chain pharmacies and auto repair shops that line Highway 6 as it makes its way through Sugar Land and Missouri City.  Are there any chain restaurants known to mankind that don’t have at least one location here?

Most of our Middle Eastern or Mediterranean restaurants just identify themselves generically.   There are, to be sure, many dishes that are common to countries throughout the region but there are also national specialties and recipe variations that we seldom have the opportunity to experience.  That seems to be changing - just in the last year, a couple of Iraqi places have opened, our Persian and Israeli/Kosher places have always set themselves apart and more Lebanese places seem to be identifying as such.  There is our Palestinian jewel, Al Aseel, too, and I was very excited recently to have discovered this place, which is Syrian, and also a restaurant featuring Egyptian dishes. 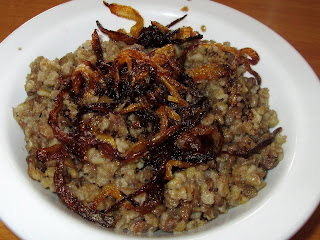 There are several Syrian specialties on the menu but the one I wanted to try first was the Mujaddara, a dish reputedly derivative of the ‘mess of pottage’ that Esau sold his birthright for in the Bible.  It’s another dish that has several variations throughout the region, the Syrian version as served here is made with brown lentils, cracked wheat, olive oil and long, slow, thoroughly caramelized onions.  As the server approached my table with the bowl, I was tempted to reach out and grab it and dig in, so enticing was the aroma, and it proved to be as tasty as my nose told me it was going to be.  Like the Ful Medammes I just discovered a couple of years ago, this is another ancient dish of really very simple ingredients that is enormously satisfying.  No wonder it’s been around so long. 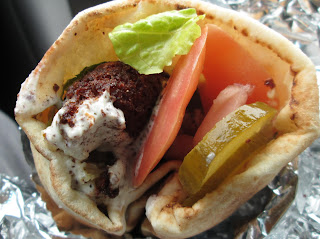 I’ve also tried a falafel wrap.  We have at least one other restaurant with Syrian roots, Mo’s Knockout Grill on Kirby, and the falafel there is one of my two favorites in town; I wondered if Dumar would offer yet another great iteration.  Alas, the falafel was not as awesome as Mo’s but the sandwich itself was very satisfying - stuffed with at least three large, elongated and somewhat irregular balls of falafel (made with chickpeas and fava beans) with both tahini and hummous, lettuce, tomatoes, onion, pickle and pickled turnips.  A house-made hot sauce is available as a condiment but they tend to be very cautious in the application of it.

The small grocery section in the rear offers teas, some canned goods and spices, dried chickpeas and more.  In the cooler are some cheeses and phyllo dough.  There are Syrian and Armenian meat pies (safiya or sfiya) listed on the menu and in the cooler you can pick some up to take home plus Syrian pomegranate pies.  In addition to the sweets listed on the menu, they sometimes have kunafa, the Arabic cheese and vermicelli pastry soaked in sweet syrup and topped with chopped pistachios.

The owner, Bashar Dumar, is something of a character; he loves to banter with his customers as well as serve them the foods of his homeland, and he makes the visit here all that much more enjoyable.