THIS RESTAURANT HAS GONE OUT OF BUSINESS.

This is the new name of the Nicaraguan restaurant at this location, replacing Nicaragua Restaurant and before that Managua.  I never went to either of those here nor Managua at its original location but looking at the Press review from two and a half years ago, I remember that I intended to and just never got around to it.

I was introduced to Nicaraguan cuisine a few years ago at Fritanga Nica which was unfortunately lost to most Houstonians, so far out on Synott at Bissonnet.  Nicaraguan cuisine has some differences with other Central American cuisines, among them that the Nica kitchen seems to rely more on steaming (in banana leaves, not always with masa) than other cuisines.

Selva Negra means black forest and it’s the name of a coffee estate, mountain resort and nature preserve near Matagalpa. 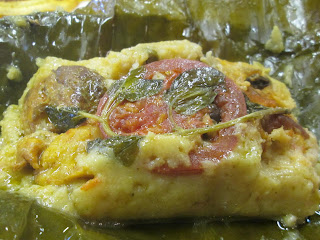 On my first visit I spotted the Nacatamale on the menu and immediately chose that.  That was not on the menu at Fritanga Nica when it first opened, though I think they added it later, and I had never had one, but it’s the first thing I read about that made me want to try Nica cuisine.  It’s an entree sized tamale, one is enough per person, and compared to descriptions I’ve read online, the one at Selva Negra is pretty simple - chunks of pork, unpitted green olives, raisins, a tomato slice, maybe a caper or two and some bits of onion and carrot, I wasn’t sure, and lots of lard.  The herb on top is I believe mint as indigenous mints are commonly used  in Nica cuisine.  This was presented on the banana leaf it was steamed in.  I’ve sampled a lot of tamales over the last few years, including others of this type, the huge tamale Tolimenses of Colombia which can be big enough for two people, the Hallacas of Venezuela, Salvadoran, Guatemalan, and Cuban tamales plus the pastele of Puerto Rico and this has to be among the best I’ve ever had. 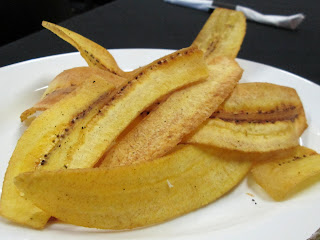 I got an order of Tajadas to accompany this (half gone by the time I remembered to take a picture) and though the tamale proved to be solid enough to be forkable all the way to the last bite, I used the chips as scoops, an excellent pairing. 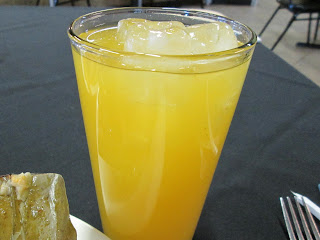 I also got a Maracuya, a passion fruit drink.  I had also learned at Fritanga Nica that refrescoes naturales are really popular in Nicaragua and there are 14 on the menu here.  It was very sweet but very refreshing on a rather balmy Houston ‘winter’ day. 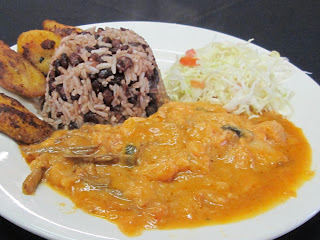 On another visit I chose yet another entree from the Traditional Plates section of the menu which  comprises only about a tenth of the menu.  I went with the Indio Viejo or Old Indian stew which had been recommended by the waitress on my first visit.  This is shredded beef (brisket, I believe) in a sauce traditionally based on sour orange juice, thickened with masa.  This version had baby corn, tomatoes, bell peppers, maybe a little bit of potato or yuca.  It was very good, among the best dishes I’ve had at any of our Central American restaurants.  It came with Gallo Pinto, the Nica version of a dish common through out the Caribbean and Central American region - rice and beans, plus plantanos maduros and ensalada.  To accompany this one I chose the Linaza, the linseed or flax refresco and it proved to be awfully sweet, quite surprisingly as I was expecting something kind of savory.  I couldn’t even tell if there was a fruit juice base or if it was just sugar water with food coloring and I couldn’t finish it because of the sweetness.  There was just a little bit of the ground flax seed in the bottom of the glass.

I've also had the Chancho con Yuca, another traditional dish consisting of well seasoned fried pork (rib meat I believe), steamed with yuca and topped with the house ensalada.  I’ve seen the salad referred to as curtido and ensalada de repollo but here they just call it ensalada - finely shredded cabbage with some tomato, always served here well chilled, crisp and with a nice acidic bite.  Compared to the vivid flavors of the pork and cabbage, the yuca was very bland and uninteresting.  But as s I often do with dishes I’m not familiar with, I took the leftovers home and found the yuca to be a delightful dish on it’s own when it had more time to soak up the flavors from the pork and ensalada. 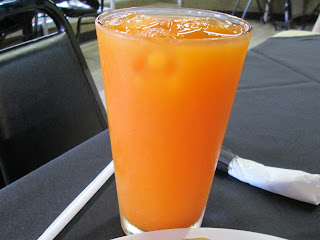 With the Chancho I tried the Zannahoria con Naranja refresco - carrot with orange.  Although sugar had been added it wasn’t as sweet as the Maracuya and it was delicious and this was the best of the refrescoes that I've tried.

Selva Negra bills itself as Central American cuisine instead of specifically Nicaraguan; there are a few Mexican dishes and some labeled CentroAmericano but for the most part I think the dishes are Nicaraguan.  All of the dishes I’ve had were less than $10 but there are many that go for more than that.  I have been most interested in exploring the ‘traditional plates.’

They’re open 7 days a week.  At the present time, they’re only taking cash.