From the owners of Bistro Provence 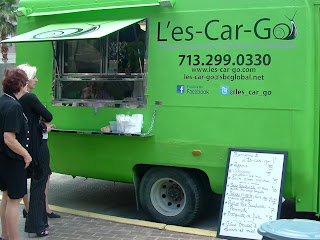 When I first moved to Houston I lived just a block and half from Ari’s Grenouille, a French sidewalk café at Westheimer and Mandell.  The aromas wafting out of that kitchen over the intersection and the whole neighborhood at times were irresistible and I became a regular.  Over the years I lived there I consumed mass quantities of snails, frog legs and wine but I eventually moved away (and Ari’s has long since shuttered).

In the years since I have made occasional visits to the French Riviera Bakery on Chimney Rock, French Gourmet Bakery on Westheimer, Le Madeleine, and, in recent years, Melange Creperie, but I have otherwise not ventured into a French restaurant and it was only with modest interest that I saw the news that we were getting a food truck that would serve French food.  An early menu posted online included gazpacho; that got my interest up a bit.  In the summertime, gazpacho is a major food group around my house and I thought that would be a good time to check them out.  Then they tweeted about adding a pulled pork Provencal sandwich to the menu and I decided the time had come. 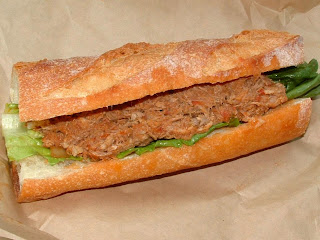 Though I went just to try the pulled pork, once I saw the menu I wanted ‘one of each’  and this has been a common theme every time I catch up with them.  The smartly attired crew, which includes Bistro Provence owner Jean-Phillippe Guy doing the cooking,  in their green smocks and jaunty Alpine fedoras, worked quickly and turned out the sandwich in no time.  It was simply dressed on an incredible crusty and chewy Slow Dough baguette and was great.  I couldn’t possibly have handled any thing else on the menu that day and that’s a bit of a shame since the menu changes and some of those items have not made another appearance.  Regulars on the menu include the Escargot Poppers and frites; there is usually also a soup and a dessert and at least one sandwich.. 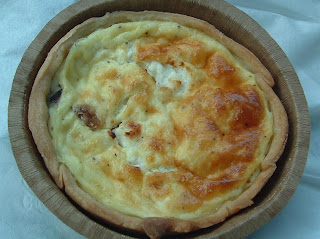 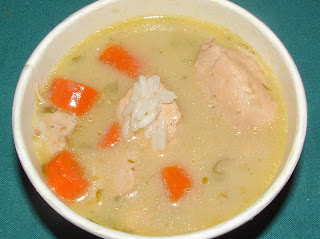 I’ve enjoyed one of the Texas Goat Cheese quiches which was wonderfully creamy and savory.  The quiches have come with either salmon or maple smoked bacon.  I also tried Le Poulet a la Estragon, a chicken stew with carrots, rice, white wine and tarragon with a very generous portion of chicken and my only regret each time was that I couldn’t eat more off the menu that day.

The poppers are dusted with almond flour, deep fried and served with a hot sauce so I understand.  I have a feeling they’re going to be rather addictive.

Initially they were tacking taxes onto the listed prices but they’ve since adopted the practice of all the other food trucks and include taxes in the price, which have crept up correspondingly.  The website lists their appearances for the week and also the updated menu but you also need to follow them on Twitter, of course, to keep up with the inevitable delays or cancellations because of the weather or equipment.  I’m very grateful they’re regularly scheduling stops outside the Loop.

Since I’m not much of a Francophile as I say, it is a bit odd that two of my favorite street food venders are French: this truck and Melange Creperie.

Delighted you've been enjoying our food. When people ask me about what goes into a particular dish, I always reply "lots of love". Of course, it requires good ingredients, but most of all it requires pation. I enjoy cooking, and above all making people happy with it :) Post like that one, let's me know I'm accomplishing that goal.

I look forward to checking out your menu every week and hope to keep sampling a lot more in the future. Keep up the good work.