Or is the name of this trailer Gorditas y Tacos La Bala? That's what it says on the sign on the fence. 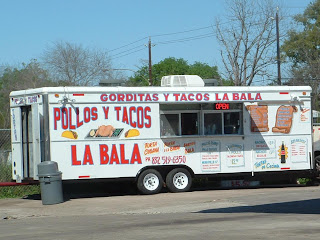 I’d seen an older truck with the La Bala name on it at this location many times but never stopped. The very new looking wagon, a line of customers, and the fact my first choice for lunch one day was closed, persuaded me to give it a try. I’d wondered if the truck had any connection to Tacos La Bala (Bellaire, Beechnut, Dashwood) and I noted machacado on the breakfast menu and desebrada and cochinita pibil for tacos, gorditas, tortas, etc., items that are not very common on taqueria or lonchera menus, and there is the Torta de la Barda, too. I’ve had the machacado and desebrada at the La Bala taquerias and I was persuaded this must be a mobile unit by the same folks.

One of the phrases I have used repeatedly on the blog is something like ‘I burned out on such and such’ and it applies here. I burned out on loncheras over a year ago and I don’t think I’ve stopped at more than one or two since then. There seem to be a lot fewer of them around my part of town than there were a couple of years ago. This turned out to be an auspicious re-acquaintance opportunity - the food was very good, perhaps the best I’ve ever had from a lonchera on the Southwest side. 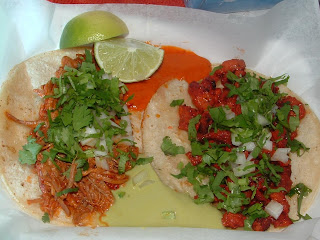 I went with desebrada, one of my favorite meats, and pastor. The desebrada was better than I’d had at the taqueria on Bellaire, the pastor better than what I had at the location on Beechnut. It was the juiciest and most flavorful pastor I’ve had since my last visit to Karanchoe’s over a year ago with tender meat and fatty pieces, not a dried up or overcooked morsel among them. I squeezed both of the impressive salsas on the tray rather than on the tacos so I could get a better picture of the taco meats then decided I didn’t need the sauces at all.

I got home and looked up the comments online about the taquerias and was reminded their cochinita pibil is highly acclaimed. Then I realized that for some reason I’d never gotten around to trying the cochinita pibil at the taquerias, a bit strange since I’m sure it’s what first persuaded me to put them on my list of places to try. So I went back the next day and tried that and the nopales. The pibil is fully worthy of all the praise and I’m kicking myself for never having tried it before. For many years, this was my favorite Mexican dish and there are only a couple of other versions around that I like. It's good to know there's a purveyor so close to home. I got this order to go and unfortunately the taco de nopales suffered from being wrapped up in foil for the trip home, the cactus becoming unappealingly limp verging on mushy.

It’s a bit of a sketchy neighborhood; the parking lot/driveway for the convenience store/gas station is frequently packed and parking can be a hassle. Tacos on maiz are $1.50, for flour, $1.75 - have prices at loncheras gone up? Is that the new standard price? If not, this place is a bit more expensive, but worth it. Lengua and tripa are a bit more expensive than the other meat choices but the pollo asado offerings, which I have not tried, are less pricy than other pollo asado wagons.
Posted by Bruce at 12:56 AM

I live a stone's throw from the Tacos La Bala on Bellaire, and wander by there often. The writing on the truck, the look of the tacos and sauces, and the pricing makes me agree that this IS a mobile truck for them.

Their cochinita pibil is spectacular, if not hard to order for a non-spanish speaking gringo like me. I also adore their fajita meat tacos, and I'm 50/50 on their tacos al pastor (called tacos de trompo on their menu). I found there chicharron to be big hunks of slimy fat, not what I expected and not appealing (again, gringo here).

Thanks for finding this truck!