For several years before I made the decision to do a blog I had been very much into barbecue, burgers, and Texas-made sausages and The Texas Sausage Trail was one of the first categories I established on this blog. But there are unforeseen twists and turns in life and the blog has become more focused on ethnic and neighborhood eats in Houston. I’ve only been up to Austin and Central Texas once in the past 3 years and I didn’t stop at any of the barbecue emporiums or smokehouses or butcher shops along the way on that trip. But it was about 3 years ago that I happened upon this place while researching another project down in the Santa Fe area.

It was a nasty day; the parking lot was full of mud-splattered vehicles of the 4WD and dually variety. Inside, coolers were stacked all over the place, bearing the names of the hunters whose bounty was inside.

When I finally found the meat cases there was only one variety of sausage, a pork and beef jalapeno sausage (they make other varieties I understand) so I grabbed a package and got back to work. Back home, I tossed the package in my freezer in a section devoted to sausages I’d collected on previous trips around the state. 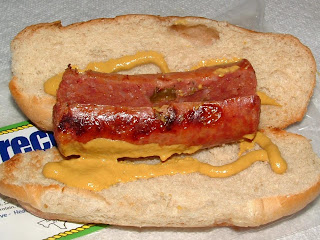 It was only recently that I came across the package again and heated some up. To be honest my expectations weren’t too high for an unheralded sausage maker from Santa Fe. I had looked for something online back then and found nothing (there are a few brief mentions now). I was down to the last of the link before I remembered to take a picture and the little piece I had left is lost in the bun from Three Brothers. The first thing I had noticed was the rather larger pieces of jalapeno, confirmed by a more pronounced taste of jalapeno than one usually finds in jalapeno sausages, but it had only a modest amount of heat. It’s a medium-coarse grind, densely packed sausage; I hardly detected any smokiness; it might benefit from finishing off in a smoker rather than stove top as I did. However I was pleasantly surprised by this sausage and next time I get back down there I intend to check them out for some other varieties.
Posted by Bruce at 12:38 PM