I have to thank alief foodie for alerting me to this place. I've driven by many times on the way up to Phoenicia or Cafe Caspian, etc., and just assumed it was another Mexican Panaderia. I guess I hadn't looked very closely in some time or I would have noticed the Bistrot 1919 umbrellas and looked into it further.

Asturias is an Argentine bakery and cafe (the menu card calls it a Confiture). It's a little larger than Manena's but about as cramped. There are serve-yourself display cases of breads (Pan Francis, Criollos, Cremonas, Libritos) and facturas (mini Danish), plus cakes, etc. There are packaged cookies on the shelves, baked in-store. I was tempted by a tray of alfajores but I'd better not have a whole dozen of those around. There are Argentine groceries including flours and mixes, ready-baked Boboli type things that I assume are meant to be used for pizza (made in house), Yerba Mate products, La Saltena products, spices, and Argentine cheeses. Frozen products include sausages and some frozen dough, half pints and pints of Trentino gelato from the company started by an Argentine ex-pat here in Houston a few years ago, and more. There are ready-made Sandwiches de Migas, the thin, crustless Argentine sandwiches that I love, in about nine different varieties including palmitos, ham, turkey, and prosciutto, and also some ready made po-boy type sandwiches. I assume you can get those made fresh. 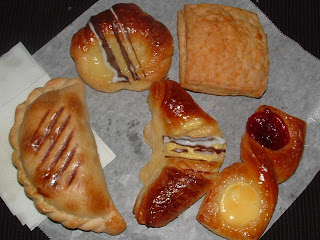 I got a beef empanada plus three facturas and a criollo. The baked rather than fried empanada was heated up in a sandwich press. It had a juicy beef picadillo filling, savory rather than spicy, with a slice of hard boiled egg; this would be similar to the Gaucho at Marini's but not as spicy and with a much thinner, flexible crust. They also have a chicken empanada. The facturas had the typical fillings of crema pastelera, dulce de leche and dulce de membrillo . The Criollo, like the Libritos and Cremonas, is a flaky bun, similar to puff pastry.

The serve espresso and cappuccino and the like, hence the Bistrot 1919 umbrellas on the sidewalk.

The website is in a holding pattern. I've uploaded menu card scans to Urbanspoon.

Whew! I'm glad that you like my recommendation (^-^). It would have sucked, if you thought otherwise.

Speaking of bakeries, are you open to Chinese baked goods? If so, I really recommend King Bakery, which is located on Bellaire in the Cafe 101 and Fu Fu Cafe plaza. As usual, it's best to go early on the weekends b/c that's when the baker brings out the goods fresh from the oven. I really dig the bo lo bao w/custard (pineapple buns), which looks similar to the Mexican conchas. Another favorite is the BBQ pork bun, but some people don't like it b/c they aren't familiar with the Asian BBQ sauce. Ooh, the almond cookies are buttery good too.

Oh, and I apologize for venting on your blog about my horrible experience. You are absolutely right that I should have reported them to the Hlth Dept. It was like reliving that moment, when I saw the name of that place on your blog. So sorry!

Yes, certainly liked it. Have you been to Manena's, Westheimer @ Wilcrest? Very similar store but I think my favorite Argentine place is still Argentina Cafe down near the Galleria. Not so much of a bakery, though.

Hadn't heard of King but have been to Six Ping and am fascinated (don't know much about Chinese baked goods but am enjoying learning). The original of Six Ping is in the Diho Center, I think, but there's a new location in the Viet Hoa Center, on the West Belt at Beechnut, that is more accessible to me.