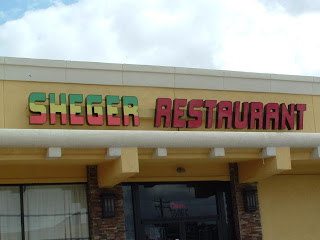 Unlike the Sudanese restaurant I happened upon recently where it took me a quarter hour to get a clue about what cuisine I was about to experience, this one's sign gives it away: those are the colors of the Ethiopian flag. I've also learned Sheger was an old name for Addis Ababa in one of the regional dialects.

They've been open since September. I've passed by numerous times without ever noticing them because they're easy to miss, back from the street, not facing the street, and with no street side sign.

The room is large, sparingly appointed. The young hostess was very pleasant and personable. 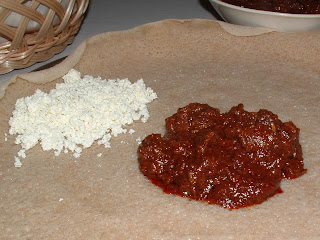 I went with the Yesiga Wat. I'd never had this before at an Ethiopian restaurant but had seen it mentioned in a thread about beef stews on a discussion board and wanted to try it. Beef stew my foot! I know a bowl of chili when it's served to me and that's what this is - the Ethiopian version of chili. And damn good, too. I wonder if any competitors in chili cookoffs have considered using niter kibbeh and mitmita in their recipes? It came with just a generous side of aib, the Ethiopian cottage cheese made from buttermilk, and 3 pieces of injera.

The menu does not list any beverages but there were perhaps 2 dozen beers and a few wines displayed behind a counter/bar. There is a section set aside for the Ethiopian coffee ceremony but after finishing off the wat I didn't think I had room for even one cup of coffee without exploding.

I'm kind of swamped with places I'm investigating right now so it will probably be some time before I get back by but I am very happy we have another Ethiopian restaurant in town. Although they have escaped notice so far the word is out in the Ethiopian community, apparently; I was alone at first just after noon, by the time I left 5 tables were occupied.