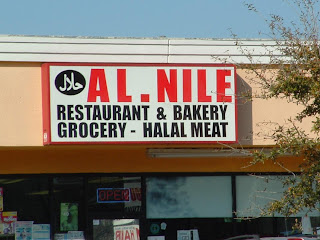 This is new signage identifying this place as a restaurant. I’ve driven by this place dozens of times, usually heading east on Bellaire on the far side of the street. I’ve noticed it before but never realized it was a restaurant until I was stopped at the light heading west a couple of months ago and could see the signs in the windows advertising Shawarma and Desayunos for $2.99. Hola and selam and welcome to the United Nations of Sharpstown. I could also see that there were tables and chairs in the windows facing the side street.

I wasn’t able to find out much about it online other than it had changed hands recently and was allowed to serve food on reusable plates and with reusable utensils. I hypothesized that a restaurant serving schawarma with Nile in the name might be Egyptian so I read up on Egyptian cuisine before stopping in only to be confounded when I first confronted the menu board. Though I recognized a couple of listings - I guessed Beans and Egg was a reference to Ful Medammes (confirmed a few minutes later) and Falafel - both of which are Egyptian in origin - none of the other dishes looked like the Egyptian dishes I’d read about online, nor did they look like Ethiopian dishes.

There was no schawarma or desayunos but there was a line at the bottom of the board that said Gracias Por Su Visitar. I think the change of ownership is probably a factor here.

It took about 10 minutes before anyone came out from the back. In the meantime I browsed the shelves of the small grocery store where I saw products from Syria, Spain and California, rows of Goya products, mulberry syrup, pickled turnips, and bagala, cumin chickpeas, from Lebanon, bags of masaseca and loaves of both the white and brown injera from nearby Maru Ethiopian Grocery. In the freezer were packages of okra and jute leaves and frozen pita and in the cooler, lassis, Karoun’s yogurt drinks, Bulgarian Feta Cheese and tubs of Abali yogurt, plus non-alcoholic malt drinks from Lebanon and Holland and Arizona Tea.

Two young men sat at a table drinking from glass mugs what I assumed to be coffee; the dishes on their table were devoid of food and piled on the side. At another table 3 people, soon joined by a fourth, talked but they had no food. I’ve since learned they don’t serve coffee here; the beverage was hot tea.

Finally a young man came out from the back and apologized he had not known there was a customer. I immediately began asking about the dishes but his explanations didn’t help much so I just decided to order the falafel and head for home to hit the internet to try to identify some of these dishes. But he said he couldn’t serve the falafel because he was all alone in the kitchen and didn’t have time to make it so I went for the Beans and Egg instead. He said he could have that ready in a few minutes and he would give me a salad, some pita and a hot sauce on the side. At this point I was going to consider my visit a success just to get out with something identifiable and edible but this was sounding pretty good.

He came back out in just a few minutes carrying a tray of food for the table of four. I saw something that looked very much like fufu in a bowl of a red sauce, a small salad and some pita bread - that was all I could get a glimpse of. The food all seemed to be for one man and he immediately started pinching some of the substance in the middle of the bowl off and popping it in his mouth. I thought fufu was a West African thing; does the Nile extend all the way to West Africa? Which of the dishes on the menu board was fufu?

As the man went back into the kitchen I spotted a display case in the corner I had not noticed before with some t-shirts for sale so I went over to take a look and at last got a clue - I saw t-shirts promoting a free and independent state of South Sudan and proclaiming ‘I am a Free Citizen of South Sudan.’ In the clutter on a counter nearby there were several business card holders including one with cards for Dar4 Auto Sales, a car lot in San Antonio, and one for this business itself: Al-Nile Grocery & Halal Meat was the name at that time, with a sub-heading for the restaurant - House of Delicious - Sudanese, African and Middle East.

Okay, so my knowledge of the geography of Africa is a little rusty. Sudan is the largest country in Africa and more of the Nile flows through Sudan that either Egypt or Ethiopia with the White and Blue Niles meeting at Khartoum, the capital. This was before the recent referendum on separating the south from the north had even gotten underway and I’ve never seen any of the t-shirts since.

It was about 10 minutes before my food came out. In the meantime I had selected a powdered sugar cookie from a table of baked goods on display (I’ve since learned the baked goods are produced elsewhere). The food smelled great on the way home. I only recently discovered the dish Ful Medammes but it has quickly become a favorite and I’ve taken to keeping canned fava beans at home because the dish is so easy to prepare and so satisfying; it’s no wonder it’s been around since the days of the Pharaohs. I’ve been experimenting with seasonings and condiments to add when I make it at home and I’ve only had it one time at a restaurant up until this place but now that I look for it I have encountered it on many menus of Middle Eastern and African Restaurants.

This was the best version I’ve had, pungent with cumin, with a nice kick from chile pepper plus lemon juice, piping hot, topped with chopped, ,hard boiled egg and a small amount of cheese that I couldn’t identify but might have been feta. My salad had suffered a bit from being closed up with the steaming hot beans and the greens had darked a bit, the pita bread, beautifully golden on both sides, was thinner than any I’ve ever had before and the hot sauce was a real plus - the color of wasabi paste but spreadable, grainy like a mustard, packing a wallop of garlic, chile pepper and lemon juice. The large powdered sugar cookie had a date filling. This turned out to be a very satisfying first visit after all.

I hit the internet and immediately began finidng the dishes I remembered from the menu - Molokhiya, Aseeda, Tagalia, Tamia (these are the internet spellings). 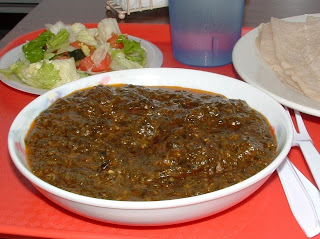 On another visit a couple of weeks later I hoped to find Tamaaya and Shorba on the menu, two dishes I had read about online that intrigued me the most, but neither were available (the former is ‘Sudanese Green Hamburger,’ the latter a lamb stew from Khartoum with vegetables and spices, seasoned with peanut butter and lime). The falafel was not available again nor was my second choice so I settled for the Mo Khia (the spelling on the menu board). This is actually another dish of Egyptian origin, some say created by the Jews during their stay in Egypt. Molokhiya or jute leaves or Jew’s Mallow is a plant in the same family with okra and it has the same properties as okra, adding a thick mucilaginous texture to dishes. The stew included chunks of lamb. The sliminess didn’t bother me at all but jute doesn’t have much taste, less than spinach, no where near as much as collards or mustard greens.

I was given a choice of accompaniments, injera, pita or rice and went with the injera. Kissra is the staple bread of Sudan, made of corn or wheat, typically, but I was told it’s the same thing as injera and they don’t make their own here, they just serve the injera from Maru. I got three pieces of the white injera and proved to be a bad choice - it didn’t hold up to the thick stew at all, dissolving almost immediately when I tried to use it to pick up the pieces of lamb. It is common in Sudan to eat with the bare fingers of the right hand and it was quite messy; fortunately plastic utensils are provided. The very fresh injera didn’t even hold up to the simple salad of lettuce, chopped tomato and cucumber, sans dressing of any sort, nor the hot sauce (Shata it’s called) which accompanies everything here.

The stew got a little boring. I’ve read one reason people don’t find African food very interesting is they use a lot less salt than we are used to in the West so I looked around for a salt shaker but saw none, nor was there a pepper shaker. Then I realized I probably was supposed to add the Shata to the stew but by that time the Shata was all gone - I had polished it off like it was a side dish (I’ve got to do something about my garlic addiction, I guess). I was subsequently to learn I was using the injera wrong, too.

Continue reading the report here.
Posted by Bruce at 4:56 AM