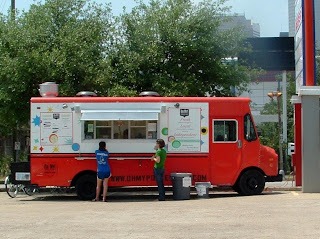 I finally managed to catch these guys and it was well worth my trip down there. 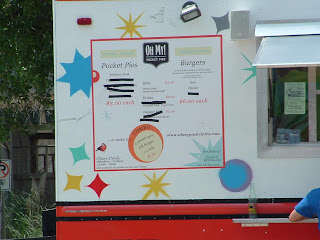 They were having a very busy day. I got there about 1:30 and they were running out of some items, indicated by the black tape over some entries on the menu board. A couple more pieces of tape went up while I was waiting to order.


Fortunately they had an off-the-menu daily special of a Sloppy Joe (on top in the picture). I got the two pie plus side special. Both pies were great with a very satisfying not-too-thick, flaky crust. We never had Sloppy Joe's in my household when I was growing up and I don't remember ever having one outside of a school cafeteria so I really enjoyed this; the Salisbury steak was also very good, with a savory mushroom and onion gravy. I have been following a discussion on one of the national boards about meat pies and was tempted to weigh in with my opinion that none reach the greatness of an Argentine or Venezuelan empanada but OMPP gives me pause.

My wind-blown salad with vinaigrette (they also gave me the Ranch dressing as a dip for the pies) and the cole slaw were nothing special compared to the pies, unfortunately, but I did get a good look at one of the burgers and was looking forward to going back to try one. I planned to check to see if Wally World had a sunbonnet in my size first, however. 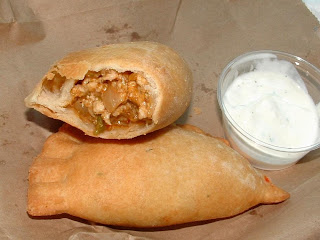 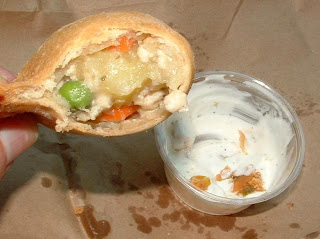 As I got closer to the window on another visit though my thoughts were turning more and more to that pie crust. As it turned out my choices were pretty much made for me - they were sold out of burgers and also the vegetable pot pie so I went with the Chicken Chile Relleno and Chicken Pot Pie.

As I was advised when I ordered, the Chicken Chile Relleno was a lot more flavorful, on a par with the Salisbury Steak and Sloppy Joe pies I'd had before. The veggies in the pot pie were generously sized and not over-cooked, happily still crisp-tender, but I found the gravy too thick and starchy. I had kind of been hoping for something like a Bolivian Saltena, a juicy, stew-like meat pie that I've heard about but never experienced.

OMPP! is another great addition to the street food scene in Houston and was well worth the trip all the way downtown, though I do wish they were closer. Check 'em out on the website and Twitter before driving a long distance as they frequently run out of some items early, it seems.