December 1, 2011: Congratulations to Buffalo Sean - Melange Creperie has been awarded three stars by the Chronicle as one of the best restaurants in the city.

I've had this one listed under the Specialty Fare vendors on my sidebar for some time but just got around to trying it. The idea of a sidewalk creperie in Houston seems so out-in-left-field, it was hard to imagine.

The menu has both savory and sweet items and changes every week. The first time I went, the featured item on the savory crepes was andouille from B&W on North Shepherd. I've had quite a few of the B&W sausages but didn't realize they did an andouille and I have to say I was impressed. On my first visit, I got it with the grilled onions and peppers. 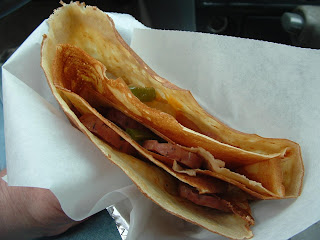 Watching Buffalo Sean work his magic is fascinating; he clearly is answering a calling in running his sidewalk stand. When I first got there on a Saturday I was the only customer but by the time I finished my crepe a traffic cop was needed to handle the traffic flowing into and out of the small parking lot of Mango's. I was so pleased with the crepe I went back just a few days later, before the menu had changed, and went with a different combination: the andouille, an egg (cooked along with the crepe) and fresh spinach.


There is a problem getting a good picture of these things, showing off the filling and the beautiful crepe itself, and I haven't really captured either of them here. I liked the one with the grilled onions better and I'm looking forward to more visits and will have to try some of the sweet crepes.

I remember when crepes were all the rage, um, a few decades ago? I still fancied myself a cook and bought one of those domed crepe pans which I'm sure I still have around here somewhere. After just a few failures, I gave up on crepes and I can't recall that I'd had one anywhere since but these things are damned addictive.

I had OD'd on tacos late last year and have been avoiding taco trucks for several months now and I'm really glad to have discovered a street food alternative to the ubiquitous al pastor, barbacoa, lengua, etc., fare. I wonder - could sidewalk creperies ever become as common on the streets of Houston as taco trucks? Now that'd be the day. With the engaging and enthusiastic Buffalo Sean leading the charge, we're off to a good start.

Melange Creperie on Facebook and on Twitter and the 2nd location in the Heights.
Posted by Bruce at 5:01 AM