There are two dozen Colombian restaurants listed on b4-u-eat.com and I guess I've been to about a dozen Colombian places over the past several years, several not listed there. This report includes two not listed.

I guess Marine's has been around for at least 20 years but I've never been until recently. When I first heard about the place it was unfavorably compared to Marini's Original Empanada House (Argentinian), which I like a lot, and since Hillcroft has been an overcrowded street that I have endeavored to avoid for a long time, I wrote Marine's off. This was not a good judgment on my part. Marine's is very comparable to Marini's and I suspect that on individual items each has a few offerings that are better than the other's versions.

On my first visit I had an empanada just labeled beef - ground beef and fried onions - and Viva Mexico - mozzarella with chile poblano. I liked the thinner crust at Marine's vs. Marini's and unlike every other Colombian place I've been to, Marine's makes their empanadas with a wheat flour based dough rather than corn based, making them even more comparable to Marini's.

The beef empanada is similar to Marini's Gaucho, one of my favorites, but was rather bland as Colombian empanadas usually are. I had read just recently that you're supposed to get your spice kick with Colombian empanadas from the sauces and on that first visit I got two, aji, a lime jello green colored concoction with quite a bit of heat, and chimichurri, a much milder but not bland sauce. Both were great. I couldn't decide which I liked better of the two empanadas.


I went back for a second visit soon after and wasn't quite as pleased by the Demichelli and Poblana Sabrosa. On this visit I just got the chimichurri sauce. The Demichelli is another one of my favorites at Marini's and this version was not as good; I think there are a few more ingredients in the one at Marini's, yielding a little more complexity for the taste buds; this one was avocado, mushrooms (canned I think) and mozzarella.

The Poblana Sabrosa is chicken with mole sauce and spices. I think it was a jarred mole and not very interesting and the spices very muted. I wouldn't order this one again but there are 48 varieties of empanadas listed so there is more to explore.

Besides the empanadas Marine's is a bakery and small restaurant serving Platos Tipicos Colombianos, including Bandeja Paisa, Sancocho de Cola on Tuesdays, Lomo de cerdo, Bistec de Higado which is liver, etc. I've only tried one of the meringue cookies but the baked goods look very appealing.

I couldn't help but notice the large sign board advertising their holiday special dishes, Lechona, Pavo Relleno, Tamales and Pernil. These are special order items and the Pavo Relleno apparently involves a whole bird. When I inquired about the Lechona on another visit I got a negative shake of the head as a response but the tamale was available after a short wait so I was happy to try that. 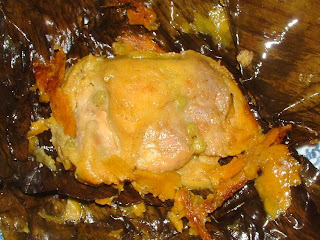 This was baked rather than steamed or boiled, I think, and had developed a little carmelization of the masa which added an interesting dimension of texture and flavor; this was excellent. There was stewed chicken, white and dark meat, boiled potatoes and peas included. I have been fascinated by these sorts of tamales, common in several Central and South American countries, since first reading about them and this was definitely a winner. The only negative were some bones, which didn't make their appearance until very late, by which time I had concluded that all bones had been removed. It is common in countries other than the US of course for meats to be cooked and served bone-in, even in something like a tamale (or even a taco). The Colombian tamale I had a Las Delicias included a whole chicken drumstick, bone in. On one of my last bites of this one I discovered several small bones, probably from the thigh, as well as a larger bone in the last piece of white meat. Not really a problem - just be advised. I'd gladly have one of these again.

Despite the name this place doesn't serve what Texans would call barbecue; rather there are grilled meats on the menu. It's a small, former hamburger drive-thru restaurant similar to the Rally's and Checkers chains that appeared here briefly; the drive-thrus are not used, it's strictly walk-up business now with a concrete table the only dine-on-site option.

The menu on the side of the building lists numerous street foods of Colombia including chunchurria and boje, neither of which are on the menu posted at the window and for which I have not been able to find any description. In three visits I've never encountered anyone who speaks more than a few words of English but the menu in the window includes English translations of all the entries. 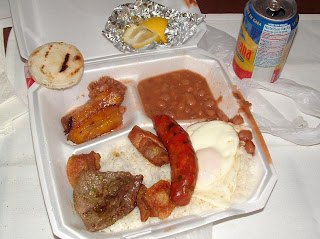 On a visit a couple of years ago, when I was first becoming acquainted with Colombian food, I tried the Bandeja Paisa, the traditional combo plate, chica version. There was a very tasty if quite small piece of skirt steak, an egg, pintos instead of the more common red beans, a large portion of white rice, an awesome chorizo and chicharron that was overcooked and barely chewable. I was most impressed with the chorizo which remains to this day the spiciest and tastiest example of that Colombian sausage I've experienced.

Colombiana is a cream soda and if I recall correctly it was included in the price of the meal which I think was $6. 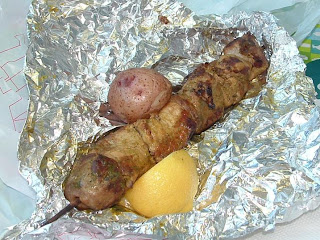 Recently I decided to try this place again and had the chuzos, described on the menu as 'schizcabob,' with generous sized cubes of pork sirloin, grilled with a little chimichurri sauce, a roasted new potato and lemon. Roasted or boiled potatoes are served with several other items here, I think, instead of fries.

This was a little dry but not bad, a very satisfactory street snack. 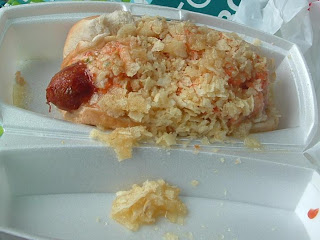 I am not a big hot dog eater and Houston is not fertile ground for hot dog afficionados but when I saw the Choriperros on the menu at El Paisa, I had to try it; it's described as a Colombian sausage on a bun and remembering the great chorizo I had had here a couple of years ago I had to give it a try. Some of the toppings here are similar to those on the Venezuelan hot dog I had recently at Sabor Venezolano, crushed potato chips, mayo, ketchup, I thought there was some shredded cabbage and carrot, but the big surprise was the very sweet substance, the yellowish liquid apparent in the little blob of toppings that had fallen off the sandwich. It obviously was pineapple, though I didn't detect any bits of pineapple. A check with Wiki reveals that pineapple juice is indeed a common topping for hot dogs in Bogota.

This by itself would take some getting used to but unfortunately the chorizo itself was the biggest disappointment, cooked completely dry and very tasteless. I can now say that the best and worst examples of Colombian chorizo I've had in Houston were both at this place.

Besides the Choriperros the menu also includes a Paisaperros, described as a Colombian hot dog, and probably using a salchicha; the menu also includes salchipappas which is salchicha, a knockwurst like, fine ground meat sausage, and potatoes, topped with a sauce that, guessing from the picture, is a combination of mayo and ketchup.

There are 4 other Colombian restaurants within a couple of blocks of El Paisa (Mi Pueblito, Dodo's, La Cazuelas, and La Gran Sorpresa), none of which I've been to, plus Blue Nile, a bakery which appears to be African, and other eateries. I've also seen a wagon labeled Los Perros on several occasions and once managed to catch it just pulling in and talked to the driver. There is a picture of a hot dog on the side and he said they serve hot dogs, hamburgers, kabobs and one other item but don't open until 5pm. There are signs prohibiting u-turns in the evening hours along the median so I'm guessing there's a pretty active night scene along here.

During the sweltering summer of '09, I got to where all I went out for was to grab something close by and dash back home to eat it. I tried a number of places very close to home which I'd never tried before including this little family-run restaurant and bakery in a rather run down shopping center.

It was very plain on the inside with a small menu and very small bakery display case (I think mostly it's special order?); the proprietor was very friendly. 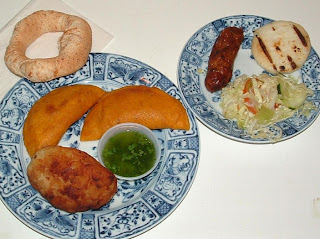 I got a couple of empanadas, a yuca rellena and pandebono which were ready-to-eat from a display case and not good and hot and fresh, unfortunately. All were made with yuca/casava flour, which I don't like as much as masa or wheat flour, but the empanadas and rellena did have a tasty filling of ground meat and potatoes which still had some toothsomeness which I appreciated; sometimes the filling on items like this are cooked to a paste and not as interesting. The pandebono, the ringy thingy, includes cheese in the dough. I think you're supposed to eat that with hot chocolate.

I thought that didn't look like enough to eat so got the chorizo with arepa, which they made fresh for me. The chorizo was an excellent, exceptionally juicy (read: fatty) sausage, coarse ground, reminding me of a good andouille, but very salty. As has been the case at every Colombian eatery I've asked, they claim to make their own. They threw in a little of their slaw?, a wilted cabbage salad with a thin slice of roma tomato and cucumber; it was very sour - I liked it.
Posted by Bruce at 7:02 PM

Thanks for the recommendations :). We've been following your blog for a while now. We recently ate at Marine's, loved the food, and were looking for comparable restaurants. Google directed us to your blog. Thanks again and keep up the good work!

Thanks. You have an interesting looking blog there too. I'll be checking it out.

Hi, yes there is a completely new menu at Pupuseria Maribel. It is under completely new management,serving the recipes of the family's Salvadorian matriarch. I invite you to pay a visit and enjoy your stay.