I'm thinking of participating in the Enchilada Cook-off on eG, so for research purposes I tried the Enchiladas Potosinas at La Silla today. 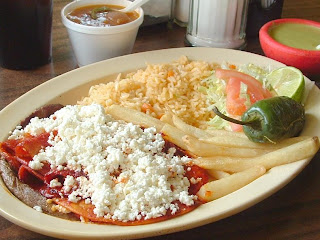 These Mexican style folded tortillas which are a specialty of San Luis Potosi have ancho chile incorporated into the masa dough which gives them a reddish orange color; they were very filling (there were eight tortillas on the plate and there's more crumbled queso fresco inside and mesquite grilled skirt steak underneath).

They also have Enchiladas Regias on the menu which they told me is the same thing minus the beef.

Update: Okay, I've been taken to task by Alison Cook in the Chronicle for not providing more details on the meal at La Silla. So I've fired my copy editor for not catching the fact the article's name suggested a review and renamed the article. I didn't mean this to be a review, just a post to hopefully prompt some suggestions of places I could go for 'authentic' Mexican enchiladas and I dislike reviewing a place on one visit, but here's a bit more:

Alison was right on the french fries - forgettable. Unfortunately the frijoles charros, despite generous pieces of chicharron and meat for flavoring, were rather bland. The steak was so thin, I thought afterward I wished I had pulled it out from under the enchiladas and rolled it up in one of the fresh, warm, hand-made corn (I think - I forgot to make a note) tortillas and added some salsa for a taco.

As for the enchiladas themselves, what I really went there for: obviously I'm not an expert but I thought the point of the dish would be the unique tortillas and the chile sauce but both were overwhelmed for me by the quantity of cheese. I've had a similar dish, enchiladas rojos con pollo, at several taquerias. This is usually served with pollo on the side or on top, just a teaspoon or so of queso and maybe a splash of crema inside the tortillas, and a modest amount of queso on top. That works better for me but I'm sure many would like this very cheese-laden version, too. If I attempt these for the eG cook-off I'll probably use less than half, maybe only one-third as much queso.

Despite leaving most of the french fries and half the beans and some of the rice uneaten I left uncomfortably full - my fault, not the restaurant's. I didn't think to count the enchiladas until they were half gone and the pile was a mess but I think there were eight in two layers.

To be fair, I think the restaurant is known for its pollo asado, not enchiladas, and I didn't try that.

Enchiladas ares so good. Can't wait to see pictures if you find more Mexican based versions!

THOSE ENCHILADAS ARE REAL MEXICAN TASTE NOT LIKE THE OTHER USUAL TEX-MEX WITH THE MELTED CHEESE AND CREAMY SAUCE.... WHO POSTED THIS ARTICLE?

I'm not sure who posted this article, I'll have to check in to that. But I think the poster was well aware these were not Tex-Mex enchiladas and went there specifically expecting them to be something other than Tex-Mex. I know I've had enchiladas potosinas at many taquerias and they were all better than these, but eat what you like.