I remembered seeing something about a new Pakistani restaurant on Hillcroft and when I saw the Grand Opening banner for Haveli I went in to check it out.   As I approached, I was wistfully remembering Sabri Nihari in the opposite corner of this u-shaped, double decker mall in Little India.  Sabri was my first Pakistani restaurant and I still remember the Beef Nihari and the huge wedges of naan glazed with ghee which blew me away on my first visit.

Haveli is in a space larger than Sabri that used to be a nite club and is a bit more upscale. 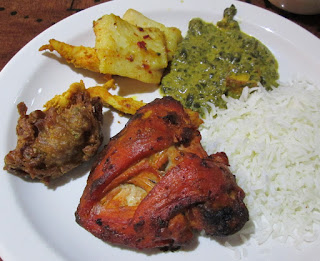 The official name (per the website and as printed on the take-out menu) is a little misleading:  Haveli is a buffet 7 days a week.  The food looked better than I remember the buffet at Sabri and I dug in.  Everything on the hot station was labeled and I got around to trying a little of most of the dishes.   In the 11 o’clock position on the plate are small pieces of Tawa Chicken and Grill Fish.  I took some Palak Paneer with toasted paneer, one of the best dishes that day and one of the best versions I’ve had, and some plain white rice, discovering on another visit the Chicken Biryani was a much better option.  I also got an onion pakora, the spiciest thing I had that day.  The Tandoori Chicken thigh was on the dry side; Frontier Chicken, looking like a Pakistani version of chicken fajitas with onions and bell peppers, was a much better option.  (I did not take any pictures of my second visit). 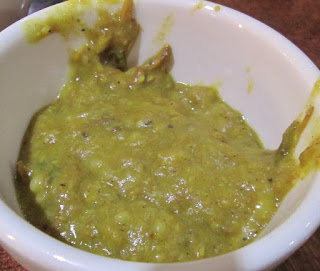 I put some of the Beef Haleem in one of the cups provided for the Chicken Corn Soup, which I skipped.  The Haleem was excellent. 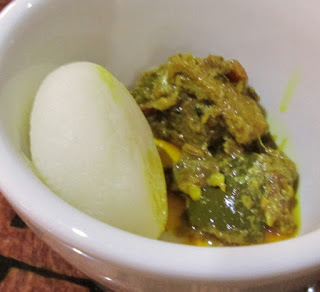 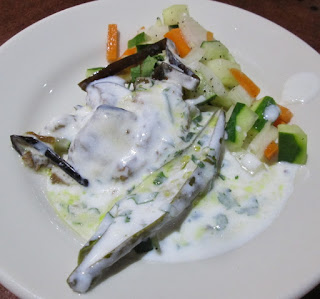 Then I moved on to the salad/chilled station of the buffet, crowded in the corner of the room.  With some mango pickle I picked up what I thought would be an idli, though I guess that would have been out of place on a Pakistani buffet.  It turned out to be a sweet, chilled, and oozing simple syrup.  Among the salads I took a simple diced cucumber, carrot and onion salad and what turned out to be, I suppose, a version of Raita with pieces of eggplant, onion, and either chilli pod (de-seeded and devoid of heat) or a pod from one of the pulses in chilled yogurt. I could have eaten a whole plate of just this.  There was also a chilled chickpea salad with tomatoes, onions and cilantro that was very good and another sweet which was forgettable plus other salads and chutneys on this station.  Unfortunately nothing on the chilled station was labeled, absolutely nothing at all, and I didn’t get the names of any of these

I have also tried Tawa Gosht which turned out to be excellent, better than the small sample of the Beef Nihari I tried.  It didn’t look very appetizing so I had passed on it until the end and I wish I had had room for more.

I skipped a korma and a jalfrezi dish plus Butter Chicken, as I recall.  I went for seconds on the Palak Paneer, Haleem, Frontier Chicken, Onion Pakora and Raita but only taking very small portions of (almost) everything.

The naan was brought to the table by a server and though it looked great it was at room temperature and a big disappointment.

There is a self-serve beverage station with Coke products and several tea options.

If you’re lucky you may score one of the covered spaces in the tunnel right in front of the door.  Having a shaded parking spot in the middle of the day in a Houston summer is almost reason enough to go by itself.

I don’t go for buffets much anymore but they are a convenient way to try out new cuisines or restaurants or just to pig out, which I don't like to do.  I still visit Fadi’s and Vishala and I think Haveli will also be an ongoing  option.  I’ll certainly give it a few more tries to see if my first impressions hold up.