Acacia moved in 2015 to 11821 S. Wilcrest, on the other side of US 59, back behind a Popeye's and in a large strip center that also houses an Office Depot and Dollar General.  The new store is more spacious.

Tis’ the season for new grocery stores in Houston, as any foodie who has been paying attention knows, but this one hasn’t gotten as much publicity as others.  Even though it’s very close to me I wouldn’t have known about it if I hadn’t received an email on my blog.  Despite the address (just down and across from Lopez Mexican restaurant), it does not face either Wilcrest or the SW Fwy Frontage road, you have to go into the strip center to see it.

It’s billed as Mediterranean/European but it’s mostly Turkish.  (The jar of ajvar I bought is a product of Croatia).  It is brightly lit and clean on the inside and very well stocked.  There’s a section devoted to frozen Halal meats including chicken and lamb pieces, plus sliced bastirma and pastrami.  A cooler offers multiple varieties of sujuk plus beef mortadella and bologna.  There’s also a very good selection of cheeses in the coolers, and of course Ayran and yogurt.  There are rows of Turkish cookies and pastries, multiple offerings of Turkish Delight (Lokum) and other candies plus Nutella and Nutella clones.  There is a small produce section and lots of pickles, olives and pickled vegetables. 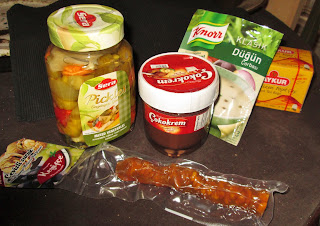 The mixed pickled vegetables were a bit off-putting at first because of the potent vinegar aroma and taste and the plastic mesh grill tightly wedged in to keep the vegetables submerged which looked like cabbage.  I had to resort to a pair of needle-nose pliers to get it out but when I did the contents quickly grew on me.  I’ve never had pickled vegetables that were so crisp; they must have been cold brined.  The label lists cabbage, cucumbers, carrots, yellow peppers, tomatoes, red peppers, wild cucumbers, green peaches, green plums, and okra.  I’m headed back to get another jar as soon as I finish this one to see if mine was an aberration. The Turkish Wedding Soup mix looked like and reminded me of the tripe soup I had at the Uzbek booth at the Silk Road Festival last year (kelle paça çorbasi) which was prepared by Turkish Kitchen of Sugar Land but I remembered the name wrong.  Actually all I remembered was çorbasi. I still haven’t figured out what’s in it - the label is completely in Turkish and I haven’t been able to find an English translation - but it’s good.  The Civizli Sucuk, so named because of its sausage shape, is a confection involving walnuts on a string, coated with (grape) molasses.  It took some time to develop an appreciation for its appeal. 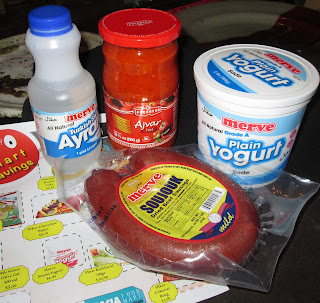 This was my first time to try a mild version of the fermented soujouk.  Not bad, but I much prefer the hot versions.  In the photo the bottle of ayran just has water in it - I am a yogurt drink-aholic and I chug-a-lugged it as soon as I got home before remembering to take a picture.  It’s available also in half gallon and gallon jugs.

A couple of caveats: many, perhaps most, of the product labels are only in Turkish except perhaps for the mandatory nutrition labels and packages tend to be large.  I didn’t see any jars of ajvar smaller than 24 oz.  Packages of dates (from California) and frozen sardines are at least a pound.

I didn’t hear about this in time to attend the grand opening and partake of the Turkish hors d'oeuvr/meze pictured on Facebook and unfortunately you are not confronted with an array like that when you walk in..   There’s no simit or bazlava but they do carry sandwich baguettes from Parisian Bakery on the Beltway and they are thinking of adding some sort of snack bar section that would offer more ready to eat Turkish goodies.  I hope they go forward with this.

Some of the pictures on Facebook show only partially filled shelves when they opened but they have been very fully stocked in the few weeks since they opened.  They’re open 7 days a week.

I was flabbergasted a couple of years ago when I first noticed street signs along 59 indicating I was in the Houston International District.  Just about the only international cuisine that's available around here is Mexican, Texan and Pakistani.  But there is the Arab-American Cultural Center on Stancliff, the Raindrop Cultural Center, Istanbul Conference Center and the still a-building Interfaith Peace Garden about a half mile west on W. Bellfort and past that  India House and a sign for a future Philippine Cultural Center.  It's good to see some 'international' merchants moving in to fill out the roster.

Acacia Food Mart
Posted by Bruce at 10:39 AM