I burned out on Indian food around mid-year last year and have been avoiding it for months. Recently though I’ve been re-discovering how much I love the flavors and dishes. I’ve checked out a couple of chat places, hoping to find a replacement for Sweet n’ Namkin, and the new re-incarnation of Pavani at it’s original location. I was also drawn to a several places in Fort Bend Co.

We revel in the diversity of our offerings from different cultures on the Houston restaurant scene and the cross-pollination that sometimes goes on between cuisines and within regional variations of some cuisines, but with respect to some of the multifaceted cuisines like Chinese, Mexican and Indian it can be difficult to explore the regional variations in depth. In the Stafford-Missouri City area, however, you can get a real good taste of the cuisine of the Spice Coast state of Kerala. There are now four eateries catering to the ex-pat community plus two grocery stores. Mahima is the most recently opened of the eateries; I had seen it last year though I never could catch it open. Perusing an Indian language newspaper while waiting for my food at another place recently I spotted a half page ad for the grand re-opening under new management.

The previous operation was mostly if not exclusively a catering operation, apparently, but the new owner is trying to expand to more OTC sales to walk-in and telephone orders. There is also a small dining area, seating maybe a maximum of 12, for dining on premises. The hours, however, are limited.

The menu has maybe a dozen to a dozen and a half offerings, not all of which will be available on any given day. Though the dishes are mostly representative of Kerala, there are some that are not particular to that state, such as Chicken Curry and Butter Chicken. 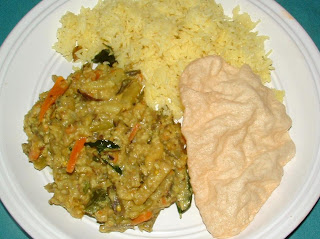 On my first visit, I tried the Aviyal, a mixed vegetable dish (I’ve gotten everything to go; all pictures are as plated at home and are only portions of what I received as you buy by the pound). Coconut is one of the most important agricultural products of Kerala and it is used in many dishes; these vegetables are cooked in coconut milk, I think. It also included carrots, potato, long beans, and the unique vegetable known as drumstick that is eaten like artichoke leaves, using your teeth to scrape the tender portion off the inedible stalks. Another common ingredient in Kerala dishes is curry leaves and I think there may have been some broccoli stalks in there - it’s a bit difficult to tell since everything is cooked down to a very tender state. This came with some rice - Wiki says there are 600 varieties grown in Kerala’s rice fields - and a pappad. Surprisingly, there was a little bit of heat, which I don’t think I’ve experienced in this dish before. 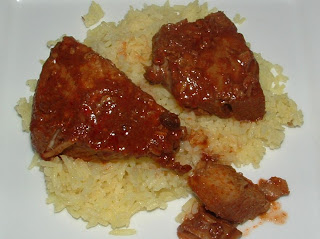 I also tried the fish curry. Another one of the ingredients common in dishes from Kerala is kodumpuli, also known as gambooge, brindleberry or Malabar tamarind, a pumpkin-like fruit that adds very sour tastes to a dish. The Kerala style fish curry is wonderfully sour and fiery and I must admit I find it kind of addictive. It is one of my favorites of the unique dishes of this cuisine. 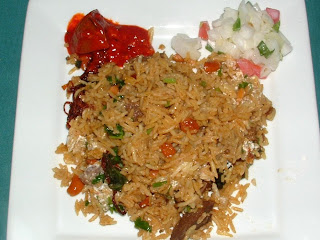 On another visit, I picked up the lamb biryani, one of four available. There are many variations of biryani in India; the Kerala version is different in that it uses very little chilli and is not spicy like most others. I understand also the rice is cooked in butter, making it very rich. It includes cashews, another important agricultural product, cardamon, nutmeg, clove and similar spices. It came with lime pickle and an onion and tomato raita. Although it was very enjoyable, I do prefer some of the spicier versions of biryani.

I absolutely love Indian food- it is up there with Vietnamese and Thai. However, as you have- I rediscovered the taste not too long ago and I cant way to try more. I cannot wait to try Mahima Indian Bistro.