Update 2017 - the building in which this business operated has been razed.  The business has moved to 5631 W. Bellfort (@ Chimney Rock) and now is known as Tamales A Mano.

I was headed up South Post Oak one day recently when I caught sight out of the corner of my eye of a large banner proclaiming 'hand made hot tamales, now open.' It took a couple of turns and a couple of Uies before I was able to get into the parking lot (you have to be headed north on Post Oak just south of West Bellfort) only to find they actually weren't open, but I did see the bales of corn shucks stacked in the windows and knew I had to come back. 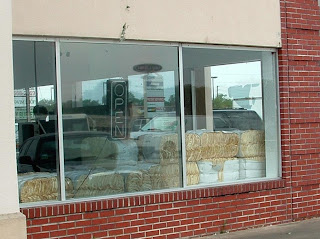 This is a new store-front and tamale factory for Houston-based Tejano Salsa and Tamale Company, offering about a dozen varieties of hand-made tamales. I had never even heard of them before and they aren't in my neighborhood grocery store but here they are with a full line of salsas, cheese dips and more.

When I was able to catch them open they were still in a very rudimentary operating mode. They have frozen tamales and hot tamales, by the half dozen or dozen. I got a half dozen of the pork with salsa verde in a cry-o-vac pack, steaming hot, for $6. They were large, about 4 oz each, tasty, with shredded pork. The masa itself was dry for my taste - I like very moist tamales - but good, nonetheless.

Besides tamales they have the complete line of their salsas and dips and some sodas. There are no tables but I was told they hope to add plate lunches in the future to their offerings.

I see from their website their tamales have previously been available at Spec's.

Tejano Salsa and Tamales
Posted by Bruce at 10:15 PM

Bruce, I think that's in the strip center where there was a Cactus Records way back when, across from the grocery store. I used to live in the area. I'll have to give them a try, any idea of their hours?

I don't know what used to be in there. It's on the east side of Post Oak, just below W. Bellfort, but there's no entry from W. Bellfort.

I'm going to get some salsa next time I pick up some tamales since they're too dry for my taste.

The location use to be Casa Ole. Not a great location for a res truant but a good location for a co-packing commercial kitchen. Tejano Salsa been around for almost 20 years and available in Kroger's and several Walmarts. Henry started making tamales several years ago for caterers, family and friends. With word-of-mouth the demand grew significantly the old location did not provide a store front. That has all changed with this new location but it's defiantly a work in progress. The tamales and a few hot lunch specials are made to-go. Along with salsa & tamales I strongly recommend trying a rare 100% cheese "K-So Cheeez Dip". It's awesome and also available at the larger Spce's stores. Thanks for dropping by my brother's place.