It's been a great year being Chili Bob. I've sampled a huge number of new places and had many good meals and only a few that made me wish I'd jumped at that career as a toll booth collector for the HCTRA and been making change in a toll booth and having a sack lunch that day. I've also had some great finds and I thought I'd jump into the fray this year with my own version of best picks of the year. For the first (and possibly last time), here's what I thought was the best of what I encountered this year. Keep in mind the limited focus of this blog - for the past year, mostly street food and small ethnic eateries that are new discoveries.

In making these selections I've followed a principle we always followed in my line of work: cream rises to the top and clearly separates itself from the rest of the glass. Also, not only is the delineation of 10 bests in any category arbitrary, sorting out any below the top 2 or 3 or at most 4 in any category is arbitrary, too (and requires much to much mental effort). Well, that and for none of these categories do I have 10 to reasonably consider anyway.

1. Pork Belly Taco from HtownstrEATS - I've caught up with this truck several times since my report and am very impressed with both the inventiveness of the menu and the execution but nothing has surpassed the pork belly taco (or it's complement on that day, the butternut squash taco).

2. Just about any Crepe from Melange Creperie - this is such a novelty food to encounter on the streets of Houston (and such a welcome one); I haven't had a disappointing one of all the varieties I've tried. 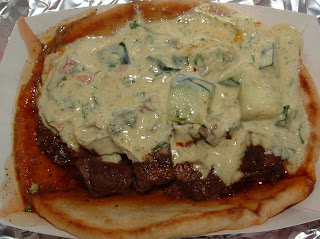 3. Signature Taco - Indian beef short rib on grilled flatbread with spicy raita from Fusion Taco - I've liked everything I've had from the Fusion folks, especially the Fish Taco, perhaps the best I've ever had (in a category that doesn't get much love from me) and I love the Asian slaw on all their tacos, but this one really is special. The filling is different from the usual taco, the condiment is different and they've changed the holder but intrinsically it's a taco; it occupies the same space, intrinsically, as a taco. I haven't even tried the quesadillas, chalupas, flautas - hey!, it's a taco truck, not a quesadilla truck, right?

4. Grass-fed beef hamburger from Oh My Pocket Pies! - once again, I've liked just about everything I've had from OMPP! (is this sounding like a broken record?) but the deal is, a few years ago I was obsessed with finding the best burger in Houston, Burger Joint Division; hence the category on the sidebar. But I hardly ever eat burgers anymore; I've had maybe 5 at the most in the past year including a vegan burger at Loving Hut. There's so much more out there to try and enjoy but a great burger is still hard to resist and this is my favorite burger in Houston right now - simply and straight forwardly presented, without all the frou-frou that other burger joints are throwing between a bun in the competition to create the most elaborate, trendy, eye-popping and media-attention-grabbing variation as possible, just lettuce, pickle, onion, mustard, mayo, ketchup (if those condiments were good enough for Moses and the Twelve Apostles, they're good enough for me). I even forgo the cheese - with this burger, it's the grass-fed beef and the fresh-baked Krafts'men bun that does it.

We have a small and perhaps slowly growing collection of food trucks that don't really fit into the Gourmet truck category but aren't taco trucks. I've hit quite a few of them this year, more than actual taco trucks in fact. These were the best finds:

All happen to operate along Highway 6 between I-10 and Bissonnet but that's just a coincidence. So far as I know, most of these International vendors are on the Southwest and West side of town.

Again, more great finds, places that will be in my regular rotation for a long time, I surmise. I think about the food I had at these places regularly.

I've been unable to rank, them, however. I wind up either with three tied for # 1 and the fourth in second place or one in first place and the other three tied for second. I could have listed them alphabetically but decided just to list them in the chronological order in which I reported on them which happens to also be alphabetical. It's like destiny or something.

1. Argentina Cafe - empanadas, Sandwiches de Migas, Matambre and Chorripan - although the variety of empanadas isn't as impressive as Marini's, this is my go-to Argentinian place.

2. Jonathan's Grill - Pampanga's - Authentic Filipino Cuisine, Kapampangan Style, the haute cuisine of the Philippines and served up by a great crew in a food court.

3. Sheba Cafe - of our limited number of Ethiopian places, I prefer the wots here slightly and also the coffee, though the injera tends to be on the dry side for my taste.

4. Sweet n Namkin - Discriminating bloggers agree, this unpretentious Indian and Pakistani vegetarian snack place is a real jewel.
Posted by Bruce at 10:03 AM

Chili Bob! Awesome stuff - we DEFINITELY have to go grab some grub together!