Get Thee some of These: 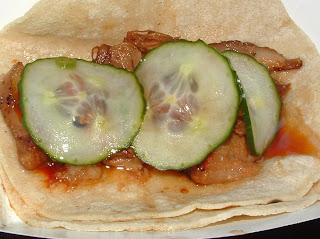 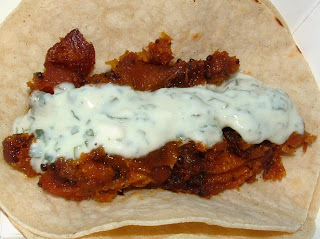 Pork Belly Taco with lightly pickled cucumber and Butternut Squash Taco with cilantro yogurt dressing. Incredible. Best street food I've had in Houston and I've had some very good stuff from the competition.

This is a very promising new truck, chef-driven as they say, with a varying menu (I've only seen these two items a couple of times). They're doing it right in my book: moving around instead of picking one spot (Montrose, Village, Greenway, for instance) and making good use of Twitter and Facebook to keep fans apprised of where they're going to be and what they're going to be offering. Not to mention serving up some great food. 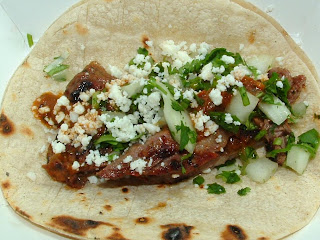 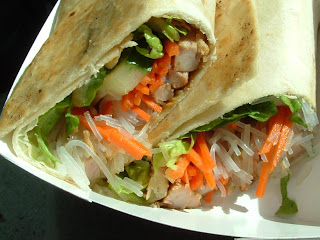 I was a little less thrilled with a couple of other offerings I tried, the Korean style sirloin beef taco with onions, cilantro and queso - this was not bad but a little unimaginative, perhaps in the toppings. I was hoping for another something mind-blowing but this was not that much different from other beef tacos. And the grilled chicken burrito/wrap (forget just what they called it) - this was very promising to behold but wraps always seem to me to be less than the sum of their parts and that was the case with this.

Both of these might have benefited from the application of some of the condiments available on the truck but I had already driven away. There are several bottled condiments and a couple in squeeze bottles, plus some chopped peppers and possibly some relish?

I've seen a great looking Ancho Chili Frito Pie, a pretty regular offering I think (glad to see somebody offering chili on one of these trucks). The bacon-wrapped hot dog looked over-dressed for my taste but I plan to give it a try. When I tried to move in on someone who'd chosen those two items to get a better look, he got very protective.

If you've been holding back from trying street food for some reason, one visit to this one will likely change your mind and it's a good place to start, but there are already several others of the same caliber and there have been several new ones hit the streets in just the last few weeks.

I wanted to give you a heads-up. A new place opened about 6 weeks ago on 90 East bound side across from NALCO in Sugar Land. Indian Spices & Snacks. It's a combo grocery & snack store. I stopped in today and got a couple of samosas, while I was waiting they gave me some samples of their other fare. If you make it down this way, give it a try.

Thanks for the tip, Jim.

If I could have one wish, it would be that
H-TownstrEATS would have another truck that would service League City so I could eat eat eat everyday!

StrEATs offers several brand name condiment sauces (Big Daddy's, Sri Racha, Lingham's) and makes quite a few of their own as well. Most of the tacos come with some sort of sauce compliment but those bottles on the counter are not just there for aesthetic purposes! Please indulge!

Also, very few other mobile food trucks can claim to be CHEF driven in Houston. These guys got it right.

I've eaten at H-TownsrEATS a few times. I am never disappointed. I love the unique flavors, the service, and the price! I have even started following them on facebook so I know where to send my friends. I was refered to them by a chef friend and I like their food better then his. He does too!

I've eaten at this food truck several times and I love it! I tend to like simple foods and shy away from fusion-type fare. But these guys manage to mix all sorts of yummy flavors without making it pretentious and overdone. Three of my faves are the pork tacos, Hawaiian sliders, and the grilled cheese. I'm not a foodie so I don't know the specific ingredients. But if you are a regular girl like me but want to try something different, find this truck!

Dude, give the bacon wrapped kimchee dog a try, you'll not be sorry!
If something seems a bit meh, try putting one of their homemade sauces on it. It will really give it some zing!

Such a fan base these guys have, eh? Thanks for all the input and I can't gainsay anything. I've caught up with the truck on several occasions now since posting this report and had some more great eats, though nothing has quite eclipsed that pork belly taco. I just wish they'd make it out to the far southwest side say, two or three times a week.

@bruce. this is jason from h-town streats. we ahve now add sauce to the burrito. thanks for the advice.