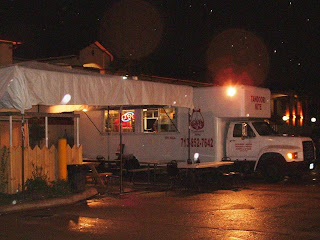 I've been wanting to try this one for a long time wondering if we might have two great Indian mobile purveyors. Why not? We certainly have quite a few very good Indian restaurants, as I have been discovering in recent months.

I've been doing a bit more cooking and eating at home of late, experimenting with Indian and Pakistani dishes in hopes of familiarizing myself with the ingredients and methods so I can better appreciate what I have when I eat out. Recently when I needed some supplies I made an evening jaunt out to the big World Foods market on Beechnut just past Hwy 6 to stock up and stopped by Tandoori Nite to pick up some food to go.

There is no menu on the sides of the truck; as you approach, you are given a menu card (below) or a sheet which lists the dishes and prices. I decided on my first visit to get the Seekh Kabab Masala. They tried briefly to talk me out of it, urging me to go for the Chicken Curry or Chicken Tikka Masala. This of course made me want the Seekh Kababs even more. 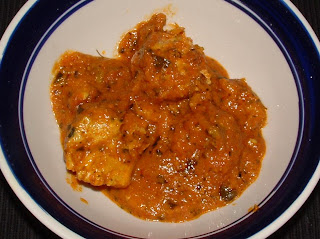 I went with the chicken as opposed to the beef but I really had no idea what Seekh Kababs were, never having had them before. Think chicken meatballs - Seekh Kababs are made with minced meats, mixed with herbs and spices, most notably in this case red pepper flakes and coriander leaf. Had I known what they were I might have passed and that would have been a mistake. Many times, it's better not to know what you're eating until after you decided if you like it.

I saw the kababs being skewered and inserted into a tandoor-like cooker in one corner of the truck, then pulled out and removed from the skewer and put in a sauce pan with some prepared curry spooned in and other ingredients added while the dish was finished off. This was excellent and quite spicy. It's a Pakistani dish and it seemed to me that in terms of intensity of flavors and complexity of flavors, this equaled some of the great dishes I've had at Himalaya. Wow, that's pretty strong. I particularly liked the minced onion and slivers of ginger, still crisp/tender, and lots of them.

I really wish I could have seen more of what was going on. If I have one gripe about this truck it's that it sits up so high that despite windows on both sides, it's impossible to see much of what these guys are doing, and they clearly know what they are doing. I'd like to see more of it. I did see one fellow in the corner, busy inserting and removing skewers from the cooker and pulling out naan, parathas and roti with a hook but I never managed to see him using a naandle nor got a look at the oven itself. 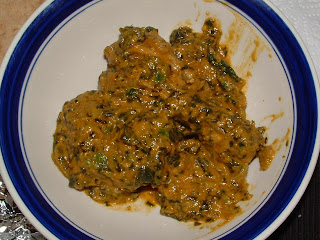 I had anticipated this would be a one time thing just so I could say I covered the base but the food was so impressive I had to go back and see if my first impressions were justified. On a second trip I tried the Chicken Saag Wala, another dish I've never had before. Bone-in, skin on pieces of chicken (a drumstick across the top, a portion of thigh in the left corner) in a rich gravy with spinach and coriander, onions, some tomato, ghee, a little bit of cream, I think, and more. This was much more savory than I expected. I had intended to eat at one of the tables under the awning (they're outside the city limits and are allowed to provide seating) but it proved to be much colder out on the prairie than in my driveway closer in and I wasn't dressed warmly enough and had to get it to go again. Dealing with the bone-in pieces of chicken was a bit of a tactical problem (I got no utensils or napkins) but not a deal breaker. While this was not quite as impressive as the Seekh Kababs it was still a very satisfying dish.

In both cases I got about 2 cups worth; what's pictured is only about 1/4 to 1/3. I tried the naan on one visit and the tandoori roti on the other and paused to remove them from the foil soon after leaving but they were already a bit soggy from the steam of being wrapped up.

I highly recommend Tandoori Nite. I'm thinking if they do this well on the less well-known dishes, they probably do very good versions of the popular dishes like Tikka Masala and Chicken Curry, too.

I understand we have another Indian or Indo/Pak truck out on the north side, listed on my Roll Call of International Mobile Vendors and one of these days, when I head out to visit an old college chum up that way (Oklahoma City), I'm going to stop by and try it. Meanwhile, Tandoori Nite and Bansuri are much more convenient to me. 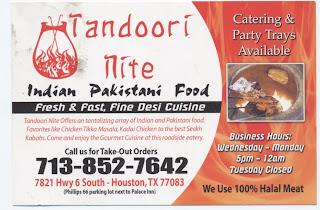 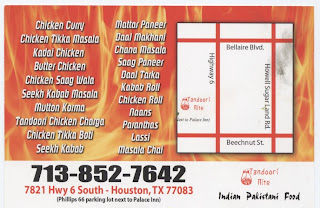