Gone but not forgotten - Sandwiches

I've been feeling rather nostalgic lately. 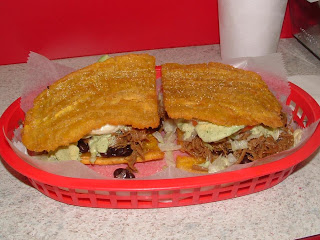 The Patacones at the short-lived Pana's Cafe on Scarsdale. One of the tastiest sandwiches I've ever had in my life. 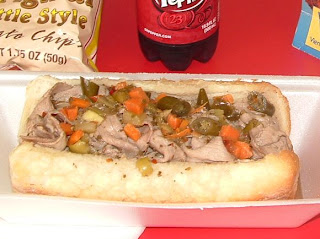 The Chicago Italian Beef with hot gardiniera at JC's Chicago Deli on Spencer Highway in La Porte. Regulation Vienna Beef provisions, put together right. I could also mention the Chicago Italian Beef at the short-lived Troy's Dawg House Grill on Live Oak, made with Troy's own recipe for Italian Beef but sadly I don't have a picture. Troy's was better but JC's was the second best I've ever had in Houston. 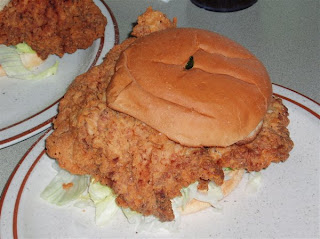 The Breaded Pork Tenderloin sandwich at the shuttered Heights Camphouse Barbecue (they called it a Pork Burger). The famous Midwestern sandwich; a portion of pork (sirloin is often used but it should be tenderloin), flattened, breaded and fried like CFS. 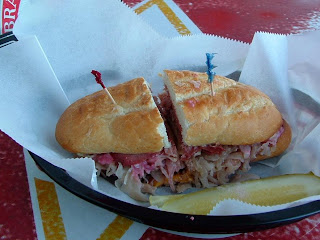 The Olajuwon Special at Kahn's.
Posted by Bruce at 9:54 AM

I'm in search of the Hoosier style breaded pork tenderloin sandwich for my 80 year old mother who has never been able to find one in Houston, TX. I see that Heights Camphouse BBQ served it once, but is now closed. Do you know of other places that might serve this delicious sandwich? Please Help!!

Not that I know of by that name. As noted elsewhere on this blog, several Cajun or Soul Food places serve a Southern-style chicken fried pork chop sandwich, usually bone-in and maybe just on white bread. It ain't the same but it's all there is so far as I know. See Burt's and Sparkle's. These are not places you'd probably want to take your 80 year old mother.