NOW OPEN IN A NEW LOCATION ON BEECHNUT AT HIGHWAY 6 IN SUGAR LAND.   CHECK THE WEBSITE LINK AT THE BOTTOM OF THIS REPORT. 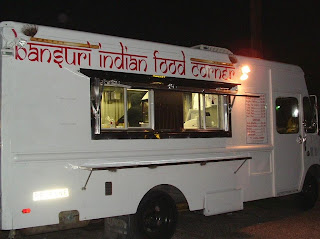 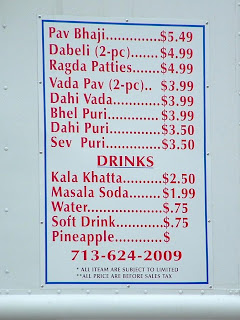 NOTE: THE TRUCK HAS AN EXPANDED MENU NOW WITH MORE ITEMS AVAILABLE.

I’d seen this truck several times when driving down Wilcrest but it never was open for business so I made a note of the phone number and called and found out it’s only open in the evening. I’d looked up most of the offerings online and determined they’re basically the street foods of Mumbai and that was confirmed by the owner who also confirmed this is Houston’s first, and so far only, vegetarian Indian taco truck. They’ve been in business about 4 months. The truck is decorated with depictions of the namesake wooden Indian flute. 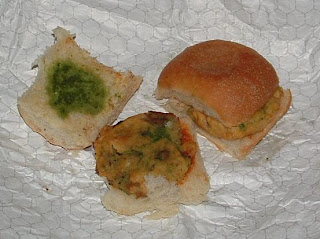 I tried the Vada Pav on my first visit, basically a potato slider on a very substantial roll with a coriander/mint chutney on one side of the bun and a garlic chutney on the other. It was surprisingly spicy and very good and I was eager to go back to try something else. 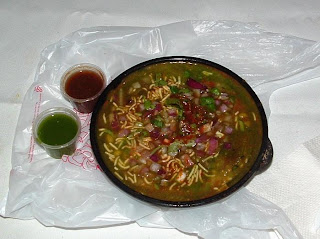 On my second visit I asked what the best dish they offered was and was steered toward the Ragda, a dish the owner said he has been eating since he was eight and loves. This is a stew of ‘white Canadian peas’ served over the potato patties (wada), with onion chutney, rice, the mint/coriander chutney and a date/tamarind chutney mixed in; you also get additional portions of the two latter chutneys to add to taste. This was awesome, almost at the limit of my tolerance for spicy food, and it put me in mind of my first visits to our excellent Pakistani restaurant, Himalaya.


I couldn’t wait to go back again and this time, Dabeli was recommended. I couldn't remember what I had read on this and thought it was going to be another stew-like dish but it was another version of the potato sliders; had I known that I might have passed and that would have been a big mistake. These were even better than the Wada Pav; the bread (pav, made from a family recipe which they have produced locally) is toasted, there’s a little cinnamon in there for sweetness and peanuts.

I also got the Sev Puri, an Indian verison of nachos or garnaches you might say.

The owners are very friendly and have been very welcoming and happy to explain the dishes. It’s just snack food, not meant to be a full meal, so you’d have to order several items if you wanted an evening meal.

They’re open Monday thru Saturday from around 5:30 or 6pm until around 9pm, weather permitting. If you’re coming from a distance (they’ve had people drive down from Bryan-College Station) you might want to make a note of the phone number and call to make sure they’re open.

It’s only about 15 minutes from my home and I've been 3 times in one week; I’ve had no problem with taking things home - there’s no place to eat, of course - but the puris need to be consumed soon before they get soggy.

I think you can get some of these at Bombay Sweets on Hillcroft.

I'm lucky enough to live in an area where the Indian culture is alive and well. With in a few blocks I have access to 7 or 8 restaurants, along with both grocery and spices stores. In saying this, I would still love a taco truck like this to visit for quick and delicious snacks. Great find.

I've only had the buffet at Bombay Sweets. Food at Bansuri is much better.

Chris - street food is better! lol. I was pondering - I wonder how many nationalities are represented by the street vendors of Houston - USA (BBQ, Hawaiian Ice, etc.), Mexican, Venezuelan, Salvadoran, Indian - those are the ones I can recall having eaten at.

Just happened to remember I've seen a Guatemalan cart, too (it had 'chapina' in the name). I've seen it twice but it's never been open and not there other times I've been by.

Oh I love hearing about the food trucks, but it makes me even more envious! There must be some misconceptions or a lack of history with chip/taco trucks here in Canada. Some sections of the country in my experience (Ontario/Quebec) have a good selection of hot dog/chip trucks where you can grab a bite. Out West you never see any, and it's truly a shame; after a ton of traveling in the States, and eastern Canada I can attest to the goodness that is the taco truck.

In saying that, I'm the guy eating street food in Central America when I go. I suppose some people just don't feel comfortable getting food from a truck.

Guatemalan and Indian trucks. Sounds great. I stopped briefly in Houston coming back from Nicaragua in November, and I may have to stay longer next time.

Every dish looks so beautiful with the colours. i am so surprised when i went to bansuri indian food center. I can’t wait to read the blog. thank you for shearing your post.

Glad you enjoyed it. I've recently heard from an acquaintance that those wonderful folks are still going strong and the place is very busy.

I been to Bansuri Indian Food Corner and loved it. I had the wada pav and ragda patties. My wife liked the ragda patties the best in town.

I drove by on Wilcrest and saw this place. We went a Saturday night 2 weeks ago. Waited about 10 minutes just for them to take the order, and the wait was 25 minutes to get pav bhaji. Couldn't wait that long but would definitely be back.

This is straight up Indian style man. I've been to India and this street food is the stuff people crave. Haven't tried the food here but presume it will be good, it was packed.

eNNov8or - you failed to leave your email for a response.